Get DRM Protection off from iTunes TV Series

In 2012, we bid farewell to a lot of dramas, “Gossip Girl” is one of them. 6 years, 121 episodes, even on the CW television network's history, it's a decent record. “Gossip Girl” has broken many shackles of youth episodes. Social network has became the most important part of its story line, the main actors are getting popular, fashion circles also being affected. Aothough its story line is getting nonsense, it completed much impossibilities, and have given us six years' pleasure. When it comes to an end, we might have missed the complex relationships.

In iTunes, its rank rises when the end coming. Can we rip TV episodes and series down, and play them on our non-Apple devices? Here is an article of how to make it possible.


For Mac Mountain Lion users, you may get the aforementioned error dialog. To install the application on Mac OS 10.8, first go to System Preferences -> Security & Privacy, click the lock icon in the lower-left corner and enter your administration name and password. Under “Allow applications downloaded from”, select “Anywhere”, like the screenshot show below. Then launch and run Tune4mac again. 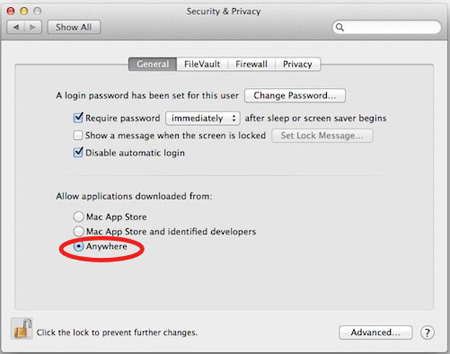