Can I Play iTunes Movie with M4V Extension on My New iPad?

If you are Apple fans, you may have already bought its third generation of iPad, the new iPad. But many of you may wander that: "Can the new iPad play movies with M4V extension, such as videos bought or rent from iTunes?" As we know, the M4V movies downloaded from iTunes are limited to play on Apple's devices only, such as iPhone, iPod and iPad. So of course, you can play and watch iTunes M4V movies on your new iPad. (And how about Apple iPad Air 2 and iPad mini 3?)

Don't be pathetic then. Actually you can simply convert those M4V movies to H.264 or MPEG-4 video to meet the configuration of new iPad video. In this case, you can try this M4V to MP4 Converter, which is called iTunes M4V Video Converter Platinum for Mac/Win. 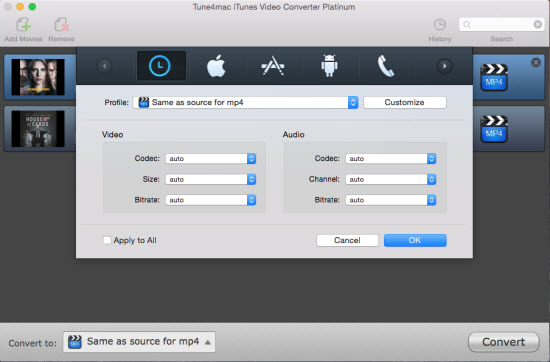 Besides, with this magic Mac M4V converter, you can also convert iTunes M4V movies to other devices, like iPhone 6 Plus, Kindle Fire, etc. Actually, this M4V converter is a professional iTunes video converter, which can easily convert both rental and purchased iTunes videos. It also support batch covnersion which makes the conversion easy and relax in 20X speed, you don't need to take much time for it, just a few step, you can easily convert iTunes movies to your device or PC. You can also play converted movies to any other media players with no limitation.

How to play iTunes movies on Xbox One

Is it possible to stream iTunes M4V Videos with Plex

Steps to transfer iTunes M4V videos to Nexus 7 for playback

How to watch movies in iTunes store on Samsung Galaxy S5