When we talk about Tablet, people's first thought is Galaxy Tab besides Apple iPad. Still remembered when iPad first generation appeared on the market with no other competitors, most people pinned their hope which interrupt the position of Tablet monopoly market on Samsung. Fact proved that Samsung didn't disappoint, Galaxy Tab take up a good market share and the reflect of Galaxy Tab is good beyond mind. 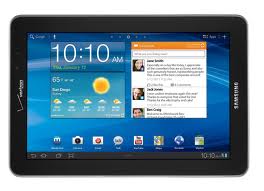 Since it produce phone, Samsung is alway synonymous of high-quality, so do tablet. From its appearance, Samsung Galaxy Tab P6800 has its 7.7 mm phone body technology and fashioned corner design shows its fashion characteristics. Dual core processor and TouchWiz are its internal characteristic, support 3G network function and voice call, video call. All in all, this Samsung Galaxy Tab P6800 fit white collar to use since its price a little high.