The newest member of Huawei smartphone family, Ascend Mate7, brings plenty of surprises to people who have been expected it for a long time. Huawei humps to Ascend Mate7 straightly without Mate3 through 6 in order to bring the new mobile phone into line with G7 and P7.

Compared to last year’s Ascend Mate2 in 6.1-inch display, the new Huawei Ascend Mate7’ s 6-inch screen (full HD 1920X1080 resolution) is actually smaller. Although phablet devices are dominated now, any 6-inch size is too big to hold. Mate7 has a good job on cutting away extra flab to make a thinner body (157x81x7.9mm), and its screen-to-body ratio is the highest 83% up till now. The more remarkable improvements of Huawei Mate7 are octa-core processor, 4G LTE, dual-load SIM cards option, fingerprint scanner (like iPhone 6 and Samsung Galaxy S5), 13-megapixel camera and up to 4100mAh battery life. 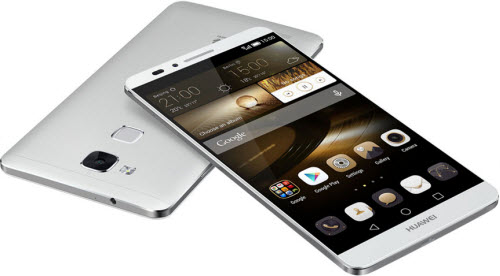 As noted above, Huawei Ascend Mate7 features full HD 1920X1080 resolution and 6 inches platform-display, which must be a joyous news for people who enjoy videos on mobile phones but feel unsatisfied with the small screen or low resolution. It also goes for iTunes purchased and rented M4V. Keep reading to find out how to backup iTunes HD 1080p movies/TV shows to Huawei Ascend Mate7.

iTunes videos in special M4V format, rented and purchased, 1080p HD and 720p SD, are under DRM protection without exception. It means iTunes users can only watch downloaded videos on limited Apple devices. As for the validity period of rental movies, 30 days to begin watch and only 24-hour to enjoy once it has been started to watch.

Tune4mac iTunes DRM Removal Software must be a favorite iTunes video converter to overcome the two difficulties. Removing DRM protection from iTunes M4V, rentals & purchases, and converting to almost all video formats, like MP4 supported by Huawei Ascend Mate7, in 20X high speed with 720p SD/1080p HD lossless quality preserved on Mac (10.10-10.6) and Windows (8/7/Vista/XP). You will never pick the second iTunes M4V converter like Tune4mac that rolling up all these features into one. 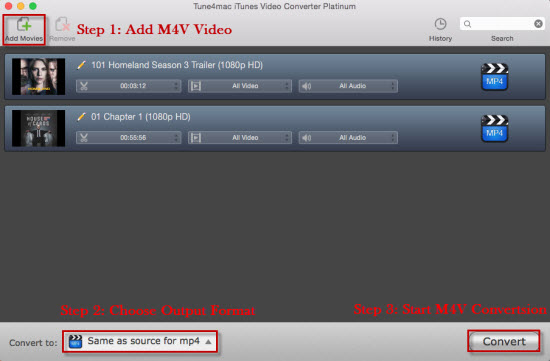 After finishing downloading and installating of iTunes M4V to Huawei Ascend Mate7 Converter on Mac or Windows, clicking "Add" button to import HD movies or TV shows from iTunes library.

Click "Profile" tag on the upper right corner of the interface to choose "Same as Source for MP4" for output file to play on Ascend Mate7.

When the iTunes M4V to MP4 conversion is completed, click "History" button to get the DRM-free output file. And then transfer it to your Huawei Ascend Mate7 via cable or SD card.

How to play iTunes Movies on Google Nexus 6?