Undoubtedly, 2011 is a year of tablets. Since there are more and more tablets being produced on the market, it becomes harder to choose the best one for us. Yes, Apple's iPad 2 continues to dominate the tablets market and recently its new iPad was released. Will it continue the legend? Others, like Amazon's Kindle Fire and Barnes & Noble's Nook Tablet seem to be two powerful rivals. And they are going to join this tablet's war with iPad. So which one will be the winner and which one should you buy? Don't worry. We just listed a detailed comparison among those tablets in order to help with your dilemma. The following is a review of iPad 2, New iPad, Kindle Fire and Nook Tablet:

Still, iPad may be outstanding among those tablets in this list. But we can also see that Kindle Fire is a very strong competitor to Apple's iPad and it may still be a better buy than the Nook Tablet. So what do you prefer to?

As fans of those popular tablets, you may like to watch movies on your iPad, Kindle 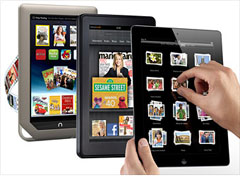 Fire or Nook Tablet anywhere you are. But you should know that some video formats, like .flv, .avi can't play on those devices, unless you use third-party video to tablet converter, such as Tune4mac Video Converter Ultimate, to convert the video files to the one supported by iPad, Kindle Fire or Nook Tablet.

It is a professional video to tablet converter for Mac users which is able to rip any popular video format to mp4 format that is compatible with iPad, Kindle Fire and Nook Tablet.

How to Transfer iTunes Movies to Your Kindle Fire